Check out what happened when children’s artwork was given to people waiting in the Healing Rooms at Bethel Church, Redding, California, USA for prayer for healing. 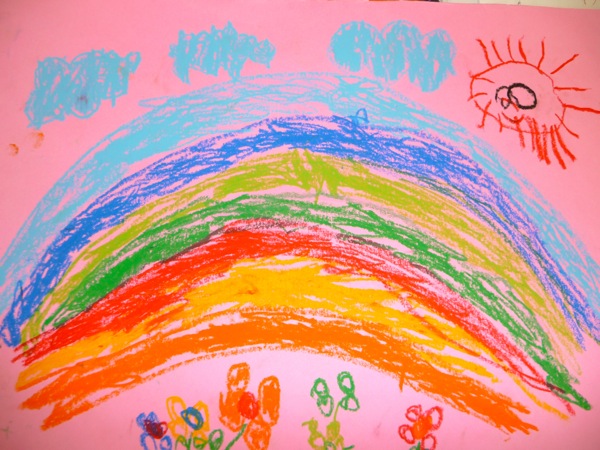 At the Healing Rooms on Saturday, Chuck Parry and team distributed seven canvases painted by two- to five-year-old children; each recipient of the art was blessed immensely. Only 3 of the paintings had notes with them, but the other pictures spoke of themselves to people. Here are the testimonies, written by Chuck:
As we walked through the Encounter Room, crowded with worshipers and those seeking healing, my intern and I asked God to highlight the right people to receive the paintings. As we introduced ourselves, we explained that the two to 5-year-old’s had painted these on a Sunday morning and released healing on them.
1. Jordan is about 12 years old and suffered from pain and dysfunction in his liver and bowels. We gave him a painting and prayed what the child had declared: “God heals owies.” He and his parents were extremely moved, and he held his painting as he went to the next room to meet a prayer team. I was unable to follow up, but know good things are happening.
2. The next painting contained lots of colors in lines, spots and swirls. Two girls had collaborated on it and one said: “It’s just a rainbow.” We introduced ourselves to a man from Switzerland and explained what we were doing and gave him the painting. I told him that the girls had said it was a rainbow and asked if that meant anything to him. “Of course,” he shared. “You see, I’m color blind.” I asked him to describe the colors in the painting, and he could name them all except he could not distinguish between blue and purple. He was rocked to his core as we prayed over him.
3. A boy and girl had painted one with “wheels and colors, river and woods” that represented a coming together. A young woman from Sweden loved it and said she suffered from severe allergies. We declared the coming together of all her body’s systems and life and strength released to defeat allergies. She also was rocked.
4. The most dramatic testimony was from a woman named Juana. She has had limited movement in her left hip and leg for more than 20 years. Her sister, who was present, would have to help her dress or put on and tie shoes, as she could not bend. When I gave her the painting, she was very blessed as she held it and looked at it. I asked her to show me what she could not do, and she raised her knee up as high as her waist, as she said, to her wide-eyed amazement: “I can’t do this!” Her sister came over and wept with joy. Within minutes, she was moving and shaking her hips as she danced around the Encounter Room. We later took her out and got a video testimony of her.
5. One painting was so artistic and cheerful that we looked for the saddest-looking person in the room. A man and his wife fit the bill. He had an injured elbow that would not bend, and she had joint pains. They both showed mild improvement, but mostly received an outpouring of joy before they took their painting into the next room for prayer. I was unable to follow up on them after that.
6. A woman with Parkinson’s disease received the painting with joy. When she went into the next room for prayer, she experienced relief from pain, restored balance, improved vision, and many other things. I need to reconnect with the team who prayed for her, as I have forgotten some of the testimony in the swirl of happenings on Saturday, but know she had many breakthroughs.
7. Our amazing Betty Cline received the last. She just received a new pacemaker that is giving her trouble. The painting was very intricate, but there was a red heart-shaped object in the middle that she took to be her new heart, and in the painting it was coming down out of heaven to her, and she was riding what appeared to be a donkey or camel. A large black figure was flying upward and she saw it as the death angel leaving as the new heart is coming. Will have to follow up on that one!